Excel games have been around forever, ever since Excel was created.
In my case, the first Excel game was a challenge and a personal bet. I have not stopped creating new games in Excel, since most of the Macros ended up serving for new projects, which I used, to help our clients.
The first Excel game of the many I have programmed was Tetris. At that time I never thought that I would dedicate myself to Excel-VBA programming professionally and end up creating a website.

– We will be able to create and optimise any report, financial and economic analysis , programs, templates, dashboard solutions and much more.
– We are capable to create formulas and the necessary algorithm needed in any company

On this website we have placed different games made in Excel to download and enjoy a while of pure entertainment!.

Tetris is a unique game and it’s notoriety on the internet was born at the moment was launched on the market. The big companies Atari and Nintendo fought hard to obtain this game, being the latter the one who would launch it.
The final achievement, thanks to Henk Rogers, got the Tetris game to be in the new Nintendo console Gameboy in its debut, which popularised both the console and the Tetris game.
Our Tetris is based on the Flash Point of SEGA, since we consider this Tetris, the best of all, although it is not the best known.
-Attached version of the year 2005 as well as the replica of the original, year 2018

It was fantastic to be able to show this game developed in Excel.
Excel is the best existing calculator to use is this mathematical game of play and solve.
An easy game to be presented in an Excel sheet, for whose resolution we could use with many of the existing Excel functions.
Sudoku in Excel is an amazing game. In our version it will be easier to solve it, since here it is possible to mark, erase and solve, as well as obtain clues.

In the Snake game, the player controls a long and thin creature, similar to a snake, that wonders around a delimited plane, collecting food or more squares. In this Excel game, the snake is trying to avoid hitting with its own tail or with the walls that surround the playing area.
Every time the snake eats a piece of food or a square, the tail grows larger, causing the game to increase in difficulty.
The user controls the direction of the snake’s head (up, down, left or right ) and the snake’s body follows it.
There are many Excel programmers who make their version of this game offering more possibilities. 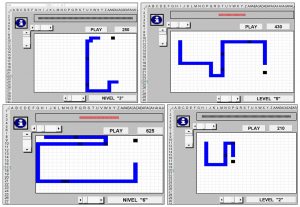 If this painter strikes for something as I see it, it is because his work is quite easy to identify, even for the most profane of audiences.
In this Excel game, model and template, I have tried to make a small tribute to Mondrian and I hope you like it.
It is intended to be a book in which we can choose the colours with to make pictures similar to Mondrian’s art work.

It is a zero player game, which means that its evolution is determined by the initial state and does not require any subsequent data entry.
The game board is a flat mesh make up of squares (cells) that extend infinity in all directions based on our initial drawing.

Invented by Robert Donner in 1989, the object of the game is to clear a minefield without detonating any of the mines.
The Mines weeper game in Excel has historically been one of the most versioned video games.
Lots of people have wanted to imitate it in different programming languages.
Is a very funny game in which we can spend hours playing almost without realising it

It is the classic puzzle game known in many places as SOKOBAN.
The range of names is very numerous.

In this Excel game, the exact nature of the diagram differs. Some players like to draw the gallows and the man’s body parts (head, torso, arms and legs).
Some other players start with no schema at all , crafting the individual elements of the gallows as part of the game, which gives the player more effective guessing opportunities.
Details may also vary with the chosen man, which affects the number of possibilities.
Excel programmers change and modify programs to improve and make them more attractive.