These are other small Excel programs that lack VBA (macros). 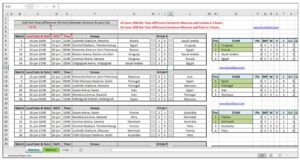 We have done the same work in two more World Cups.

For the Brazil World Cup, we have included a cell with the time difference between Brazil and your city of origin (HH:MM).

This model can be use worldwide.

For the World Cup in South Africa we improved the program including both models.For the next World Cup we will upload another model again, since it will be not difficult to modify the existing one.
As a pending task in this models, we have not being able to sort the classification of the teams in the group stage without using help columns, which was something we did not want to do, (so is still pending)

Maybe for the next World Cup !