It is a very well-known game
It is not a very difficult one however have some peculiarities that make it more attractive to Excel developers.
To resume, the Minesweeper game is a very attractive game !

It is a quite dynamic game and we can choose the number of rows (columns)that we want as well as the numbers of bombs.

The maximum number of bombs follows the same algorithm and formula used by the creator of the original game, Robert Donner in 1989.

The objective of the game is to clear the minefield without detonating any mine. 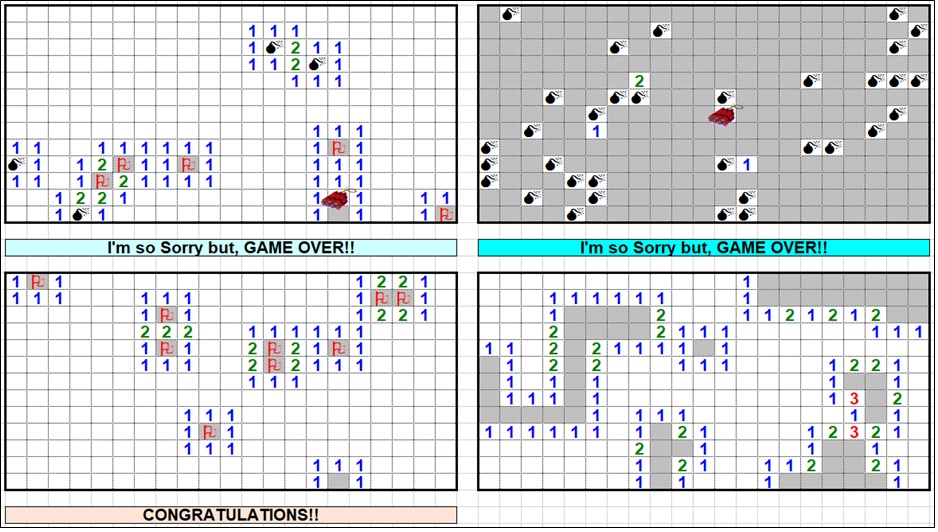 The Minesweeper game in Excel can not always be solved without a little bet of luck.

We usually, like to play using the least numbers of moves possible and try to mark the place where the mines are. And not showing the squares that we know are empty.

Once we consider that The Minesweeper game is resolved, we began to discover the remaining squares.

It is easy to check that a given placement of mines corresponds to the given numbers, however it is very difficult to find such a placement.

This game is quite simple and easy to understand, suitable for all players and allows us to have a good time.

But as such this game is quite simple and easy to understand, suitable for all audiences and allows us to have a good time, so I don’t think it requires further instructions.